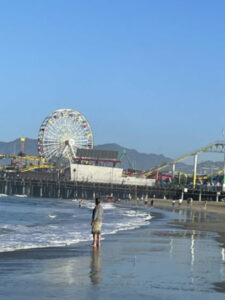 Last week, I got a text from my mom asking if I was ready to travel with “to act Italians.” Now my family has known for a long time that Siri doesn’t speak “Oklahoma” and we’ve become reasonably adept at deciphering my mom’s text messages. Usually, reading it out loud makes it possible to understand, but not that day. When I had a chance to ask her about it, my mom had to go back to her phone to figure out what she meant. It turned out that she was wanting to know if I was ready to travel with “two octogenarians!”

I didn’t answer the question because the die was already cast. On Wednesday last week, I boarded an Amtrak train with my mom (89) and my uncle/her brother (90) and we headed across the southwestern part of the United States to LA. As you might guess from today’s picture, our final destination was Santa Monica. We were there for the wedding of my cousin’s daughter (my first cousin, once removed.)

Some random observations from this week’s trip:

The wedding was beautiful and the beach wonderful, but whether I was ready or not, the chance to spend time with an octogenarian and a nonagenarian was a highlight of the trip. Travel on Amtrak, whose trains have to give way for freight trains, is not for people in a hurry or on a tight schedule. That’s partly why I like it. Time on a train across the wide open spaces means time for conversation, naps that sometimes feel like a gently rocking cradle and sometimes a bit bumpier than that, and the chance to reflect while watching the world stream by is time well spent.

I hope you find the time to do something similar one day soon.