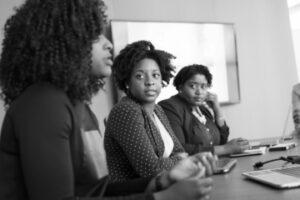 Photo by Christina Morillo on pexels.com

Or in more formal style, ‘to whom are you listening’? Whichever version you prefer, it seems to me that the question becomes more important each day. Today I was part of Laura DeVeau’s Fireside podcast Think Tank https://firesidechat.com/lauradeveauand I found myself talking about listening.

Laura does a weekly hour on topics of higher education and once a month she invites a rotating cast of characters to serve as a panel sharing our thoughts on whatever topics Laura throws at us. Civility wasn’t on the topic list today, but we talked about the challenges we experience on our campuses around civility and difficult conversations. And, in a complete contradiction of the point I wanted to make, I got on my soapbox – to talk about listening.

When we think about civility on campus, we focus on the word conversation and I wonder if it might help if we work to shift our focus from talking to listening. I know, I know, inviting people to come together to listen is a hard sell. It’s countercultural even. But really, don’t we need to try something different?

Several years ago, I began to advocate that we move away from the idea of town halls to talk about difficult topics. The model on campus and in our communities is to have the decision-makers, the ‘authorities’ seated at the front of the room, often on a stage. Everyone else is in the audience with one or two microphones to share. All too often, the supposed conversation devolves into yelling, sometimes between the audience and the people at the front, other times among audience members. What would it be like to have people seated in a circle with ‘the authorities’ mixed in, scattered around the audience? It becomes less of a ‘face-off’, doesn’t it?

Texas gubernatorial candidate Beto O’Rourke practices a version of this when he’s on the campaign trail. He stands in the middle of crowds that encircle him. It’s a question and answer process, but it’s still a different dynamic than used by many candidates and he’s known for engaging with people who hold a variety of perspectives. Yes, he made news for using an expletive in response to someone’s laughter at something he felt powerfully about. More often, though, he’s shown having meaningful conversations with people who disagree with his positions.

There are many ways to create spaces and opportunities for people to take the time to slow down and listen. My favorite, even though many people find it hokey, is to use a stone as a talking piece though any item you can hold will do. Having to pass the object from person to person slows the tempo, helps lower the temperature. But I find the most important aspect is to change one of our conversational norms – the give and take. Instead of one person working to rebut the other, each person tells their own story, shares their own opinion and everyone else listens. It’s powerful; it’s calming. It creates the opportunity to learn, maybe even to understand.

To whom are you listening? And how are you creating ways to help others slow down to listen? Maybe if we listen differently, we can go back to having conversations that make a difference.